Point of arrival #1 - The Wrens 'I've made enough friends'

This is going to be one of those semi-regular, can't-think-of-anything-better-to-write posts where I'm going to have a stab at investigation my favourite bits of music, not whole songs, but the little moments within them which makes them great (though I'll admit up front that the little moments often depend on the whole song to elevate them, thus Point of arrival). It seems only fitting I kick off with a Wrens track though I'm back-tracking a bit, to their second album 'Secaucus', released in 1996, to track 12, 'I've made enough friends.'

Weighing in at 2.48 it's nigh on perfect pop but it squeezes a lot into the time. This is less about classical pop song structure (verse, verse, chorus etc.) and more about poetry with musical accompaniment. In isolation the title reads as pure statement but as the song develops we come to understand it is also part plea and part burning frustration. At 1.50 we hit the songs raw nerve. The music drops back, the harmonies take over, "I've made enough friends".

Check out the lyrics here and give it a listen. I guarantee you won't spend a better 2.48 today.

The Darkness - a career trajectory

Over the last 4 years I have been exposed to a lot of children's television. Most of it is annoying in the extreme (particularly the hideousness that is Waybuloo), but I did once manage to work Dip Dap into a lecture on sound design so it's not all bad. Perhaps because they know that there are frazzled, sleep deprived parents somewhere in the background watching these programmes, every now and again they throw in a special guest just for us. Yo Gabba Gabba! is a case in point with Mark Mothersbaugh (frontman of Devo and amazing film composer) hosting a drawing segment along with a vast array of musical guests including Cornelius
and Jack Black dancing a jig.
Today however I saw something to rival these imports. Dan and Justin Hawkins, of recently reformed 'The Darkness,' appeared on Zingzillas. They jammed with a band comprising 4 guys in primate suits with Justin resplendent in the finest sleeveless catsuit known to man. You can check the riffage out on the CBeeBies iPlayer here. And to prove that rock n' roll excess (and tape) isn't dead you can read about the recording of their last album here.
Posted by Cormac at 22:18 1 comment: 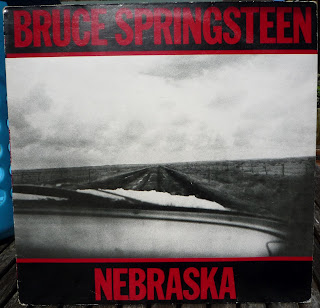 When I pop into a charity shop these days I'm finding myself less interested in the books and more inclined to crouch by the dusty bins of creased and faded vinyl. Over the last 12 months I have scored quite well on these forays, turning up the odd gem amongst the endless folk collections and multitude of 1812 overtures. Up until today my best find was Deep Purple's 'Machine Head' which the kindly old lady behind the counter who rang up my 99p assured me she remembered well. Today however I happened across Sprinsteen's 'Nebraska'. In it's own right a fine find (if you'll pardon the alliteration) but made all the more satisfying for the fact that I've been researching it recently due to it's rather odd genesis. For a start it was recorded on this: 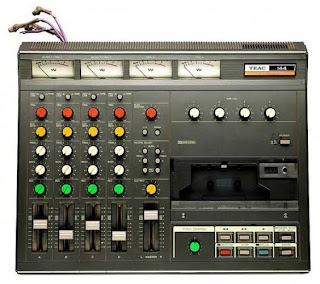 a Teac 144 Portastudio 4-track cassette set up in Springsteen's spare room. This is apparently the very one he used and it now resides in the Rock and Roll Hall of Fame. There is a brilliant article about the recording of the album here but these are some of the highlights:

- Recorded by Springsteen with the aid of his guitar roadie Mike Batlin, neither of whom fully understood the workings of the Portastudio
- Mixed at the wrong speed through a Gibson Echoplex, a tape based delay unit
- Mixed down to a Panasonic ghetto blaster which had spent at least some time on the bottom of a river (seriously)

It was never Sprinsteen's intention that these tracks would be released in this form, they were demos plain and simple to be worked up into full tracks in the studio. But he fell fowl of demo chasing, an affliction every studio engineer is familiar with. Picture the scene; the last crash of the cymbal dies away, the guitar feedback tails off. The engineer turns from the recording console to look at the band, trying to gauge their reaction to the playback. There is a pregnant pause. The guitarist shifts uneasily, looks at his fellow band mates, and utters the terrible edict "I think it sounded better on the demo."

It happens all the time for any number of reasons. It's happened to me on more than one occasion. Often it's not the actual sounds but rather the energy and spontaneity of the performance which is more satisfying on the demo. It is almost a guarantee that the band were more relaxed when tracking the demo than they were in the studio in the grip of red light fever and this can have a marked effect on the quality of a recording. Also, it may really have sounded better and that is the hardest pill for the studio engineer to swallow. That despite all their equipment, ability and effort they will be unable to attain the peculiar essence of the demo.

Thus we have 'Nebraska', awash in slapback delay, a hit and run victim of the demo chase, but sounding pretty good on it.
Posted by Cormac at 23:11 No comments:

Unleashing your music on the world

Stevie Wonder had the right idea. In 1976 he flew over 200 journalists to Long View Farm Studios in Massachusetts to listen to his new album 'Songs in the Key of Life.' Watching the film it's hard to believe the effort that went into this single event to say nothing of the cost. But for an artist at the height of his powers, his 18th album and the first released under a new $37 million contract maybe it was worth doing it with a bit of pizazz.

In slightly less salubrious, though no less iconic circumstances Pink Floyd held their press preview for 'Animals' at the Sports and Social Club of Battersea Power Station in London a year after Wonder's shindig. Battersea was still a working power station at the time and was featured on the albums cover though it still doesn't strike me as the logical choice for a an album launch!

In the here and now there are myriad ways to promote your new record without the hassle of chartering a plane, arranging a party or even turning up, but that doesn't mean the album launch event is a thing of the past. Norah Jones recently unveiled her new record 'Little Broken Hearts' live in full at SXSW. The Foo Fighter's did something similar for 'Wasting Light', broadcasting live from their studio (in 3D no less) but they went on to top that by playing a series of gigs in fan's garages, tying the live experience of the album with it's recording which took place in Grohl's own garage.

The Wrens went in a slightly different direction with the release of 'The Meadowlands.' To celebrate the albums completion (and in all likelihood to ensure against further tweaking) they decided the only way to truly finish the album was to have a party and erase the master tapes. They then released a limited edition of the album, screen printing all 1000 covers themselves. No planes, champagne, or flying pigs in sight. I reckon they're saving all that for the next one!

White vinyl is definitely the classiest.... 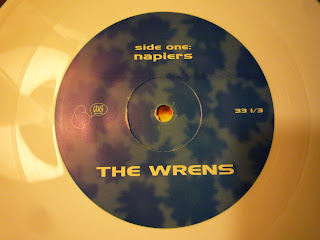 Few days at home with my folks so a bit of a break from the Wren-athon but I did manage to dig out my Napiers 7". Appropriately enough it's a 33 1/3
Posted by Cormac at 21:44 No comments: 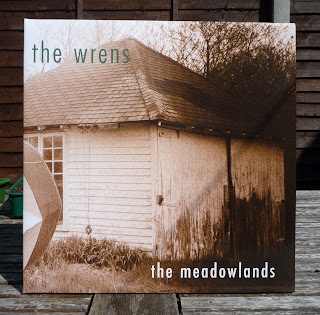 Proposal is finished. It'll need a final edit in the morning but it's all in there and ready to go. To celebrate I am enjoying a bottle of Estrella and piece of banana cake!

PS only got the album on vinyl recently and not had the chance to play it yet. Great to be able to read the lyrics without squinting
Posted by Cormac at 23:12 No comments: