Dave Grohl's love letter to the death of the traditional recording studio and a veritable nerdgasm for anyone interested in audio!
Posted by Cormac at 19:33 No comments:

In search of bass

Some 14 months after starting I’ve finally reached the point where I can listen to music in my new mix room only to discover that all the bass has escaped.

Well, not quite escaped, more like emigrated to the back of the room which, rather crucially, is not where I’d planned to sit. When I do take up position in what I have calculated to be the mixing ‘sweet spot’ (marked with a masking tape X on the floor) it’s almost as if I’ve suffered a catastrophic crossover malfunction to the extent that I did at first believe the woofers had blown. A quick walk around the room however clarified that all my low end was simply gathering some 2 feet behind my carefully plotted position.
Read more »
Posted by Cormac at 11:19 1 comment:

For the next 2 months I'm taking the Wwise course at the School of Video Game Audio. In the early stages at the minute but already fascinated by the possibilities of the Wwise software as a pipeline for working with audio for games. Particularly cool that it can integrate with Unreal and Unity which makes for some potentially interesting times ahead!
Posted by Cormac at 15:43 No comments:

Gutted, but on the plus side....new chair

So my proposal for The Meadowlands didn't make it through to the long list for selection. I am, as the title of this post suggests, a bit gutted. However, I've found the process of writing the proposal to be a useful one and it's given me some impetus to push on with a few other projects which will no doubt pop up on here at some point in the near future.

First up here's a rather nice chair I bought recently for my mix room (which is nearing completion). 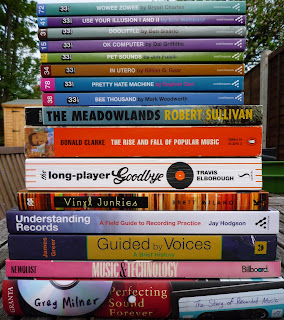 I haven't listened to Brian Eno in years but spotting his name near the tale of the long (long) list of proposals reminded me of a rumour I'd heard about there being some multi-tracks of 'My Life in the Bush of Ghosts' available online. A quick search and presto, Brian Eno and David Byrne have made the full multi- tracks for 'A secret life' and 'Help me somebody' available to download (officially no less) here.

What you get are the original audio files, all 24 of them (the album was recorded to 2" 24 track tape) as 24bit, 48kHz wav files (for the un-initiated this is essentially studio quality audio). Better than that though you get them in their original, un-sequenced format, exactly as they were recorded. For me this is the really enlightening aspect of getting hold of these files. It's not just about being able to hear the recorded sounds individually and appreciate them in isolation of the final mix, it also highlights just how much work went into editing and sequencing the recordings to deliver the final mixes. Well worth checking out.
Posted by Cormac at 11:23 No comments:

Email ThisBlogThis!Share to TwitterShare to FacebookShare to Pinterest
Labels: Brian Eno, multi-track, My Life in the Bush of Ghosts, remix

So the deadline for this round of submissions to the 33 1/3 series was yesterday and the full list of proposals was posted this morning. 471 in total and it makes fascinating reading, particularly as there are quite a few multiple submissions (the eagle eyed amongst you will note someone else has submitted for The Meadowlands. I'm looking on it as a good thing, with luck one of us will get to write about the album).

There are some great albums on the list, I've got my fingers crossed for these in particular;

I briefly considered Rage Against the Machine, They Might be Giants and Incesticide as possibles when I was in the early stages of putting my proposal together but swiftly came to the conclusion that I really didn't have a clue where to start with them.

Good luck to the team who have to sift through this lot, should be an interesting few weeks reading.
Posted by Cormac at 15:06 No comments: